America’s favorite city sits at the edge of the Western world, a location that lends even greater

romance to its legend. Pastoral, cosmopolitan and surprisingly small, San Francisco is a ravishing city, conforming to every cliché the tourist board can throw at it and acting as a magnet for nearly three million visitors a year.

Famous for its liberal attitudes, radical politics and eccentricity, it occupies a special place in the hearts of Americans and is considered the last bastion of civilization on the lunatic fringe that is California. For all its nostalgic, even provincial feel, San Francisco is an affluent, world-class city – its visitors alone pour nearly $2 billion into its coffers every year, and as the financial center of the West Coast, its business community thrives.

San Franciscans enjoy a rarefied kind of mutual appreciation, priding themselves on being the cultured counterparts to their cousins in LA. This narcissism is often rooted in the sheer physical aspect of the place. The city is indisputably beautiful, a unique confection of switch back hills, wooden Victorian houses, open green spaces and the shimmering bay that surrounds.

With a moody weather pattern that has San Francisco alternately drenched in sunshine or bathed in swirling fogs, the romance factor is high. Turning a corner, climbing a hill and stumbling across an unexpected vista literally takes your breath away. An easy city to negotiate, one of the few US centers where you do not need a car, it also has an excellent public transport system that will whisk you round its appealing, diverse neighborhoods.

It’s show time in San Francisco. From the Embarcadero (the palm-lined boulevard that traces the bay to Union Square), from the dazzlingly revived Civic Center to the trendy South of Market area, some of the city’s best new restaurants are serving excellent food with a theatrical flair that transforms eating out into sophisticated entertainment. And that’s nothing less than you would expect from one of the nation’s most cosmopolitan and flamboyant cities.

There are hundreds of hotel rooms in San Francisco. They range from very cheap to very

expensive. Some are good values, some are not. As a frequent traveler ourselves, we know that it’s almost impossible to make a good decision about choosing a hotel in a distant city when all you have is a list of all the hotels. Because of this, we do not list the website of every hotel in the city in our hotel links. Every hotel that is in the links has to pass at least one of these tests:

Welcome to Fisherman’s Wharf, San Francisco’s most popular destination. Known for its historic

waterfront, delicious seafood, spectacular sights and unique shopping, Fisherman’s Wharf offers a wide array of things to do for everyone. Our fabulous location in the ‘City by the Bay’, puts you within minutes of the Maritime Museum, Alcatraz, Coit Tower and everyone’s favorite, the world famous San Francisco Cable Car lines. Fisherman’s Wharf offers some of the most incredible views of the San Francisco Bay, the Golden Gate Bridge and the cityscape.

“SOMA” is the location of Moscone Convention Center, which hosts on ongoing schedule of 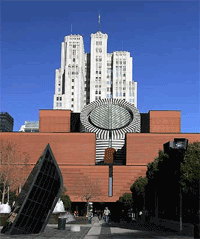 conventions and meetings in both the north and south buildings. The Rooftop atop Moscone Convention Center includes “ZEUM” learning museum for kids and teens, plus a full-size ice rink open year round, a bowling center, gardens, and a restored 1906 carousel that was originally located at Playland at the Beach, the legendary amusement park that used to entertain families at Ocean Beach. The 12 square block area known as Yerba Buena Gardens is site of CENTER FOR THE ARTS,The San Francisco MUSEUM OF MODERN ART, The MUSEUM OF THE AFRICAN DIASPORA,The CALIFORNIA HISTORICAL SOCIETY etc..
SOMA also boasts trendy nightclubs, restaurants, boutiques and factory outlet stores. Metreon Center at 4th & Howard houses movie theaters with IMAX screen, restaurants, and shops offering the latest in entertainment technology. AT &T Park, Third and King Streets, is home to the San Francisco Giants.

Community involvement is a top priority within the Giants organization, and all employees are

expected, from the players to the front-office staff, to give back to their community. Some players have developed their own programs, like Jason Schmidt’s “J-Zone” serving underserved kids. Other players give their support to one of the organization’s many community partners, including Make-A-Wish, Parent Education Network, WritersCorps, Network, Boys & Girls Club of San Francisco, GREAT, National Pro Fastpitch, Aim High, 826 Valencia, San Francisco Immunization Coalition, Project Homeless Connect, United Way of the Bay Area’s Week of Caring, JDRF, Zeum, Blood Centers of the Pacific and the Marine Mammal Center.

The name Alcatraz is derived from the Spanish “Alcatraces.” In 1775, the Spanish explorer Juan Manuel de Ayala was the first to sail into what is now known as San Francisco Bay – his

expedition mapped the bay and named one of the three islands Alcatraces. Over time, the name was Anglicized to Alcatraz. While the exact meaning is still debated, Alcatraz is usually defined as meaning “pelican” or “strange bird.” In 1850, a presidential order set aside the island for possible use as a United States military reservation. The California Gold Rush, the resulting boom in the growth of San Francisco, and the need to protect San Francisco Bay led the U.S. Army to build a Citadel, or fortress, at the top of the island in the early 1850s.
Visit Federal Bureau of Prisons 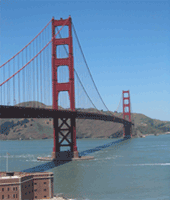 tremendous towers, sweeping main cables and great span, it is a sensory beauty featuring color, sound, and light. The Bridge can be a very busy place, particularly during the summer months. It is estimated that about nine million people from around the world visit the Bridge each year (1989 survey by San Francisco Convention and Visitor Bureau). To learn more about the Bridge and get oriented, we encourage you to read the VISITORS and RESEARCH LIBRARY sections.
Golden Gate Bridge


Warning: count(): Parameter must be an array or an object that implements Countable in /homepages/44/d831324200/htdocs/htdocs/wp-includes/class-wp-comment-query.php on line 405