Luxor Cab Co. has been independently owned and operated since 1928. Luxor Cab Co. was one of the first cab company in San Francisco. The fleet consisted of ten cars. At the time there were no bridges and taxi’s were dispatched through call boxes located on street corners. During the depression drivers were hard to come by. Dust bowl refugees overwhelmed California. Plans for the Golden Gate Bridge were on the drawing board. Luxor CabIn 1938 Luxor was the first Cab company to cross the new Bay Bridge. Two

years later the world was at war. Taxi hoods had to be bolted down to avoid sabotage and gas had to be rationed. Shared rides with military personnel were a way of life. Luxor introduce two-way radio dispatch and increases their fleet to 30 cars. As of 2006, Luxor’s fleet now consists over 200 cabs. 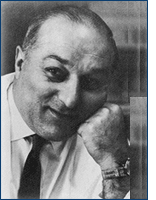 Mention taxi cabs and the name Bill Lazar comes to mind – since 1948 Mr. Lazar has been associated with the industry. William G. Lazar was born in Gary, Indiana on January 7, 1918 to parents Jack and Alma joining a family of one brother, Herb and One sister, Mary Warner. He graduated from Emerson High School and then attended Indiana University.

In 1941, he joined the Army and until 1945, served as Staff Sergeant in Africa and Sicily. When he and his family moved to San Francisco in 1945, he worked for Yellow Cab for one year, purchasing his own cab in 1949. After joining Luxor Cab Company in 1950, he became president eight years later.

In 1962, he became General Manager of Luxor Cab Company and he is past president of the California Taxi Owners Association. He also serves on the board of directors of the International Taxi Cab Association. William Lazar was a member of Star King Lodge #344; the San Francisco Press Club; Bill Moskovitz Luncheon Club; President of the American Assyrians, as well as President of the First Church of the East.

Mary Adams Warner, who came to work for Luxor Cab as bookkeeper in 1962, was the only woman president of a major taxicab company when she served Luxor Cab from 1988 to 2000. Due to her caring, compassionate, and attentive listening, many drivers thought of her and still remember her as the mother figure of all taxicab drivers. As strong as she was, she was having a hard time after her daughter’s untimely death in 1997. However, she was still as courteous and caring with all the drivers and company employees in her daily business. Born in Gary, Indiana, and like her brother above, a graduate of Emerson High School and then Indiana University, Mary Adams Warner, a cancer survivor, was a proud grand mother of many grand children.

The International Taxicab and Livery Association is pleased to anounce that William J. Lazar, President and General Manager of Luxor Cab Company is honered as the ITLA 2000 Taxicab S ervices Large Fleet Operator of the Year! Born in California, Bill started in the taxi business when he was 15 years old working for his father in every aspect of the taxicab business. In the midst of his experiences with the taxicab, paratransit, and airport shuttle business, Bill found time to be the business and public relations manager for a San Francisco law firm.

ITLA asked Bill what makes Luxor stand apart from other companies? He responded, “I believe Luxor’s tradition for providing excellent and reliable service to the city of San Francisco makes the company stand apart from others.” In honor of his many years of hard work and dedication to ITLA and the State of California, the International Taxicab and Livery Association proudly recognizes Mr. William J. Lazar as the ITLA 2000 Taxi Services Large Fleet Operator of the year.

Keeping Up With Modern Technology

Currently Luxor Cab Company is operated by Mr. John Lazar. Luxor Cab has grown to be the second largest cab company in San Francisco. There are over six hundred drivers, with many drivers staying with the company from 4 to 40 years. Luxor was the first company to incorporate two way radios, and in the year 2000 Luxor introduced the then new digital dispatch service with global positioning.

Luxor Cab Company has always been a leader in the taxicab industry in adapting a new technlogy into its dispatching system. We are working on developing our Online Dispatch System to include among other things, ordering a cab online.

Have a pleasant ride!


Warning: count(): Parameter must be an array or an object that implements Countable in /homepages/44/d831324200/htdocs/htdocs/wp-includes/class-wp-comment-query.php on line 405